Owned by Bayer, Coppertone is the famous brand name representing an American sunscreen targeting at female adults. The brand name derived from its great marketing of their suntan lotion.

Since the ‘Coppertone girl’ commercial was shown in 1944, Coppertone has gained its dedicate popularity widely. And then, they become more and more popular in the commercial field with their variety in the advertisement.

What makes the commercial gain the special support of the society? Who exactly is the Coppertone skateboard girl in 2019 in the Coppertone commercial? Let’s check our possibly listed names for the right answer!

The ‘Coppertone girl’ put Coppertone to the right place 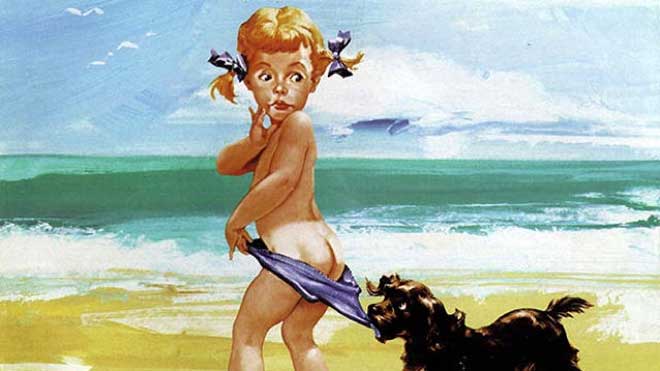 The pharmacist named Benjamin Green first invented a sun lotion to help darken tans in 1944. However, not until the Coppertone girl was introduced in 1953, the Coppertone became famous.

Their advertisement was uniquely designed with a little blond topless baby girl in pigtails; she’s looking in surprise at a lovely Boykin Spaniel puppy. The cute dog was standing behind her and pulling down the girl’s blue swimsuit bottom.

A part of her bottom was revealed showed with a lighter skin tone compared with the other parts of her body. This was really a surprisingly simple advertisement with the high efficiency.

The image of the little miss and the lovely pup then was created as the certain logo for Coppertone. After that, the commercial became the inspiration for the buildup of numerous mechanical billboards across the USA.

The motorized dog along with the pigtails, swimsuit bottoms, and so on could be seen everywhere, especially the one in Miami Beach. Even a contest to celebrate the Coppertone suncream’s 40th anniversary was held to find out ‘The Coppertone girl’. 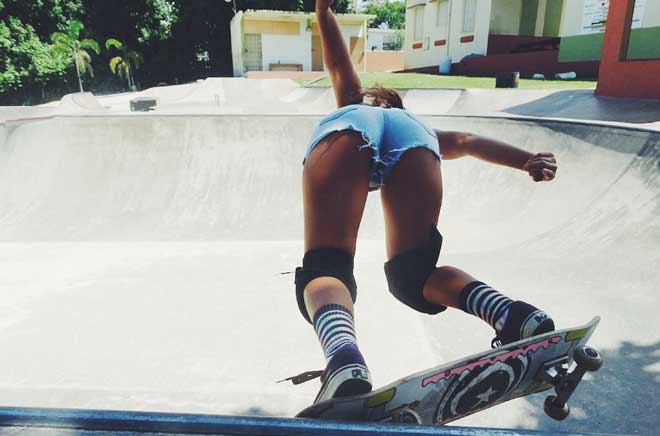 This current commercial was still introduced with the simple but sporty concept as other similar sport-based ads of Coppertone. The young actor and actress in the commercial appeared naturally in the ads like what they do in real life.

The natural and life-like modeling in the concept is perfect to attract the social attention. However, what made the Coppertone commercial a big hit is the beautiful girl appeared in the ads.

Although the Coppertone commercial girl just appeared in just seconds, she kept taking the valuable time from all of us to find who she is. The girl is in the sporty and healthy body with black crop top shirt and jean shorts.

Only that active body and the professional skateboarding skill brought all the curiosity together to spend time finding her. We are sure that a big bunch of single gentlemen lose their sleep at night because of their love for her.

The Coppertone commercial skaters are attractive. As people have probably noticed, professional skateboarding is mainly dominated by male skaters. People often view that this kind of active sport is more suitable for boys to join than girls.

Just a little opportunity was given to all young females to join in interesting skating. Males are mostly stronger and braver than females. However, this does not mean that women can not involve in the competitive world of skateboarding.

Skaters, do you want to skateboard with that sexy and sweet female skaters. Or, you are just still dreaming. Let us help you find her if she can be one of the possible listed skaters below. Let’s start our interesting exploration!

Who can the Coppertone skateboard girl be?

Skater girls are in all disciplines including ramp, street, or flat skateboarding. They can be seen as top hottest female professional skaters featuring the Coppertone skateboard girl if possible. 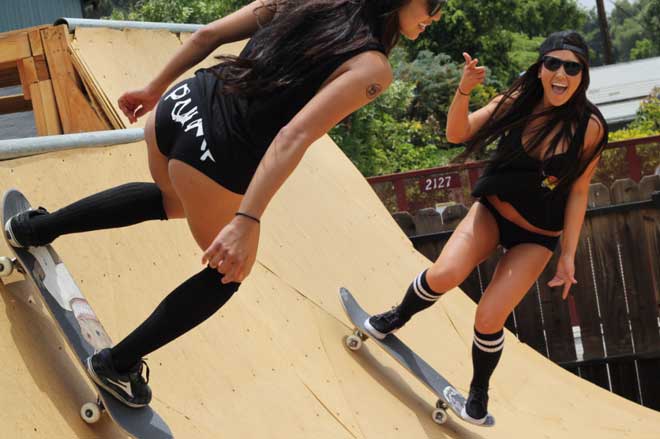 The most prominent or even the top females are known in skateboarding are here. Skateboarding fans can not only enjoy the match with our hottest extreme-sports athletes listed in our list of possible Coppertone female skateboarders.

Thousands of females are working as professional skateboarders all over the world, but our list will only highlight the most notable females. They are hard-working and sexy skateboarders with pro skateboarding skills.

Then, if you are an active female who is extremely interested in the extreme sports, the people listed below will inspire you. Need the best list for the hottest pro female skaters today? This complete list has them all in it to find the actress.

You may want to quickly find out which of them is the best professional female skateboarder for featuring in the famous Coppertone skateboarding commercial. Before we are pointing out, let’s decide for yourself! 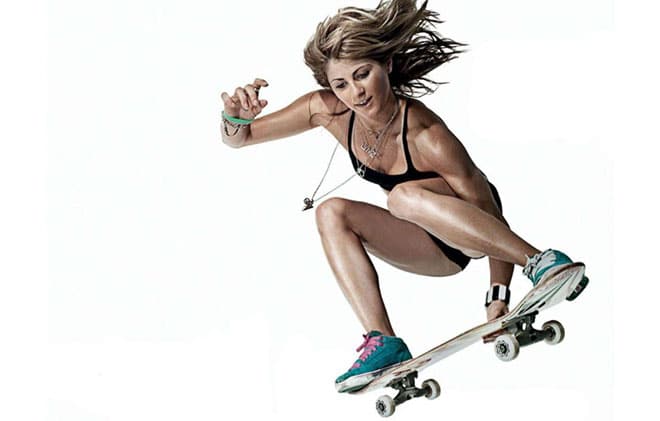 Born in stunning San Diego, Lyn-Z Adams Hawkins spent her entire childhood in Sayulita of Mexico-the place outside Puerto Vallarta. As a young athletic child, Hawkins started her skateboarding at the age of 6.

She got interested in skateboarding after receiving a membership card at the great Encinitas YMCA from her beloved brother. Soccer, basketball, baseball, and gymnastics are also her hobbies.

She is a true American professional female skateboarder with the ideal body figures. Also, she is one of few chosen skaters participated in the famous DC Mega Ramp. And, the very first female professional skateboarder to do that is her.

After her long break because of her injury, she won her gold medal in the popular women’s vert competition in Los Angeles at the X Games 13. In 2009, this women became the first female skater landing the 540 McTwist competitions held in France.

Lyn-Z Adams Hawkins featured the playable skater well in the video game of Tony Hawk. Mr. Double Backflip, as well as Travis Pastrana, love the ideal skateboarder thanks to her guts.

The first pro female skateboarder attempting the DC mega ramp is the ideal model to feature the Coppertone skateboard girl. Over the recent years, she got sponsorship deals from both DC Shoes and Birdhouse and won an X-Games gold medal. 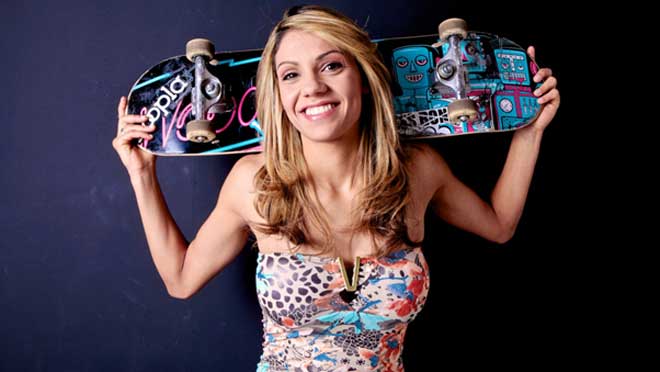 She is a stunning Brazilian supermodel with an unexpected exceptional skateboarding skill. Although she has already got married and had a child, she still has an ideal female body.

Eliana is now one of the most growing female skateboarders from Brazil. This young mom skates every day to enhance her skateboarding skills. And, she has secret skating tricks in her wise mind.

Those listed reasons make this woman a technically talented pro female skater in this dedicate field. She has also completed three times in the X-Games with her best finishes.

In 2014, she even won the Girls Assault held in Mar del Plata after completing the street best tricks contests. With those achievements, this pro skater is worth featuring the Coppertone skateboard actress. 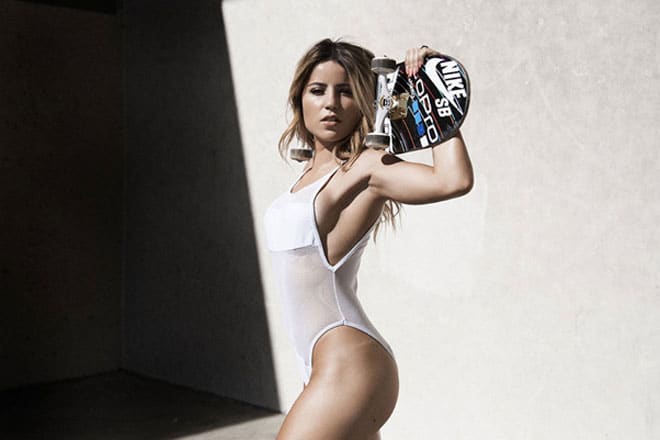 She is an excellent nominee in competitive 2013 ESPY Awards for the category called Best Female Action Sports Athlete. She is a gorgeous Brazilian skater girl with her charms and beauty.

She won many excellent awards and great recognition at her younger age. This young skater is just 22 now. She features in numerous skateboarding photos as well as video sequences which grab everyone’s attention towards her.

She is a perfect candidate for the Coppertone skateboard girl. With the overall ranking of about 22, she receives a limitless list of sponsorships from Nike SB, Bones, Oakley, TNT Energy Drink, GoPro, Crail Trucks, Grizzly, Plan B.

Undoubtedly, she will do her best at what she chooses. She may probably be the beautiful Coppertone skateboard girl in the excellent commercial. 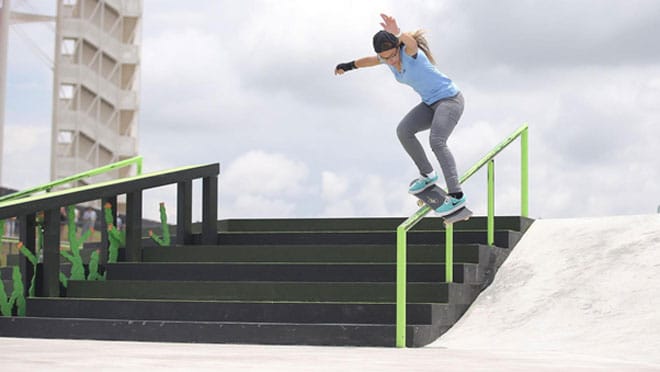 In the past couple of years, numerous talented, as well as professional skateboard females, have grown as much as the male counterparts. This list is written for the possible female skateboarders for featuring the Coppertone skateboard actress.

It has also proved that this interesting extreme sport is not for males only. Even faced limitless struggles, Pamela Rosa still becomes a true model for the female skateboarding girls.

She won the 2016 street contest called XG Oslo Women. And, at the age of 16, she became the youngest little female champion in the perfect industry. In Austin 2014 and Austin 2015, she won both the gold and silver medal.

It is worth saying that this girl is certainly the most consistent with excellent flip tricks. She is also the ideal Coppertone skateboard girl. 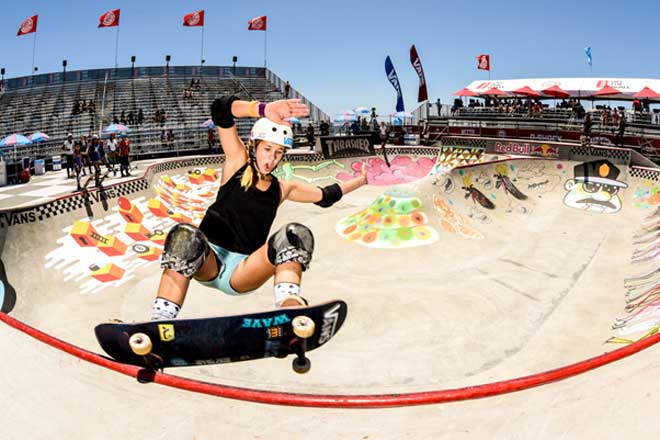 One of the most excellent and dedicated female athletes is here. She spent many hours skateboarding and surfboarding to improve her inborn talent. She is also the most outstanding, passionate, and talented sportswomen.

Moreover, she is also a fierce competitor for trying to make her real dream come true. This female skater has already won two excellent X-Games medals (bronze and silver) in the 2016 and 2017 skate park events.

Called a “trailblazer”, this was the only female skateboarder to compete the Dew Tour well last June. Jordyn Barratt is coached with difficult skateboarding tricks with outstanding skating style.

In 2016, she even became the very first female pro surfer for competing for both the surfing and skating parts at the popular Vans US Open. Barratt may also skate for famous brands such as Vans, Bones, Powell Peralta, and Black & Decker. 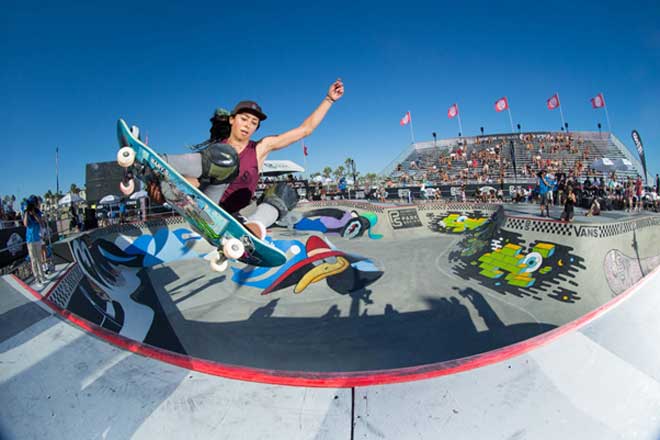 Lizzie Armanto is certainly a strong candidate for spotting in the Coppertone skateboard commercial. Originating from beautiful Santa Monica, California, she first skated in 2007 along with her younger brother.

Then, she developed her amazing passion for both the skating bowls as well as vert. For the few years from 2010-2012, she placed the first overall position with excellent Skateboarding points race in the prestigious World Cup.

Also, Lizzie has won over 30 prestigious skateboarding awards. In 2013, Lizzie had won her gold medal at the first Skateboard Park event for women at the X Games held in Barcelona, Spain.

The winner of the Van Doren Invitational 2014 held in Huntington Beach of California is also Lizzie. This is an extremely excellent and ideal Coppertone skateboard girl name to look for if possible. 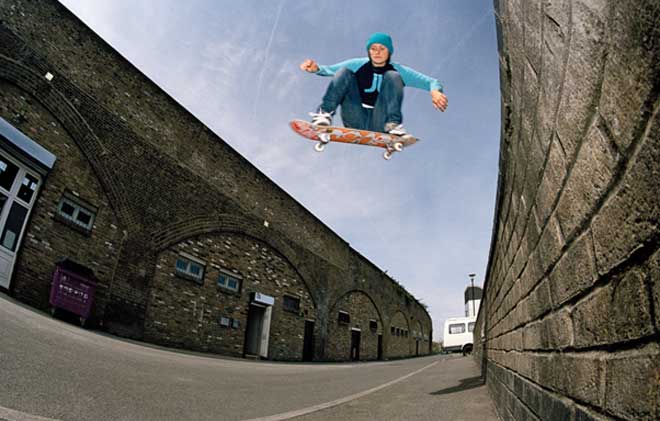 Kate Shengeliya is also a deserving candidate for appearing in this perfect list. You will be extremely impressed to know her achievement. With 2179th global ranking for overall, Kate should directly be pointed out as a naturally gifted skateboarder.

Without a doubt, many sponsors are given to this 24-year-old young and lovely girl. Her most prominent list of sponsors includes Nike, Skate Bag, Go Pro, 69 Slam, and Baby G. She is well-placed in this nice list with her S-line body! 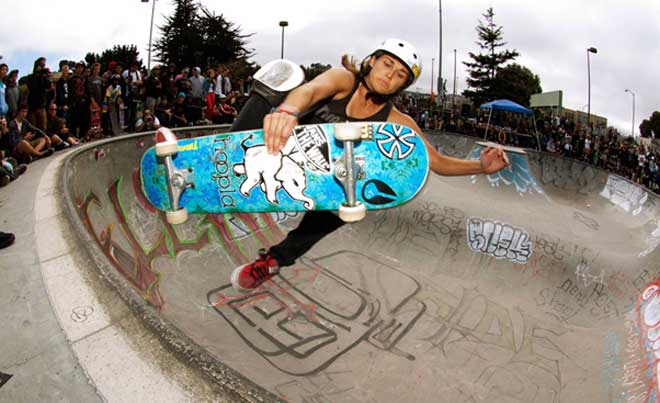 This female skateboarder is a popular X-games medalist with many fun and joy if growing up with. She did master her skating skills well since she was just a lovely child.

She is a successful, renowned skateboarder with five prestigious X-Games medals while she just turned pro exactly in 2003. She loves supporting and promoting skateboarding in young females.

Thus, she started founding the Women’s Skateboarding Alliance & Hoopla Skateboards. She is not only a respect-worthy but also successful female skaters worldwide.

When talking about attractive commercials, Coppertone is such a dedicate candidate for the successful model regarding their strategies. They dominated the attraction by developing the brand new ideas.

Adding the feminine existence to excellent commercials is the smart way to grasp the entire attention and popularity in this field. Hope that our adequate list will successfully help you find out the nicest model for the Coppertone skateboard girl.