Snowboarding is one of the most popular sports in winter in many countries all over the world. Anyone can play this sport if they spend one or two days practicing. That being said, some people find it is not easy to master this sport.

Have you ever tried snowboarding? How is snowboarding different from skiing? If you are a beginner in snowboarding, there are dozens of things you need to gain before starting to play. First of all, you cannot ignore basic knowledge of snowboarding as well as our guide on how to turn on a snowboard.

How Easy Is It To Learn Snowboarding?

“How easy is it to learn snowboarding?” This is a common question asked by those who are newbies to this winter sport. But we must say that it is hard to answer “Yes” or “No”.

As far as we are concerned, to master any sports, you need to invest your time and effort in learning and practicing. What’s more, the person is one of the deciding factors. All these facts are also right for snowboarding.

Is Snowboarding Easier or Harder than Skiing? 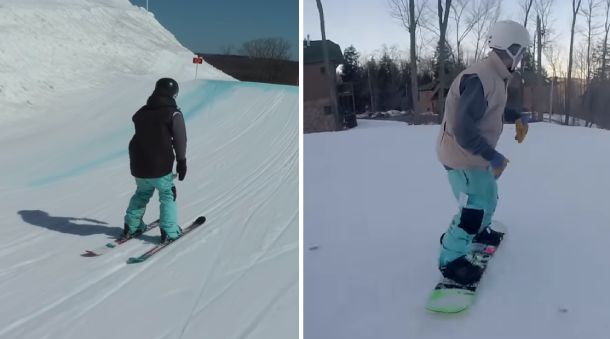 In general, the two snow sports have quite a lot of common points. Therefore, if you master either of them, it will be much easier for you to start up with the other. That being said, there are some differences between them.

Skiing requires a pair of skis that is fastened to your feet. These skis’ function is to assist you in navigating and moving smoothly over snow. Meanwhile, you will use only one piece of equipment for snowboarding; therefore, you mainly navigate by your own body.

Some professional snowboarders and skiers usually say that it is harder to learn snowboarding but easier to master it while you can start out with skiing at your fingertips but it is quite challenging to master this sport.

On the other hand, several people think in a different way that it takes them a short time to get skiing skills and it is much more difficult to learn how to go snowboarding.

Who can get Snowboarding at their Fingertips? 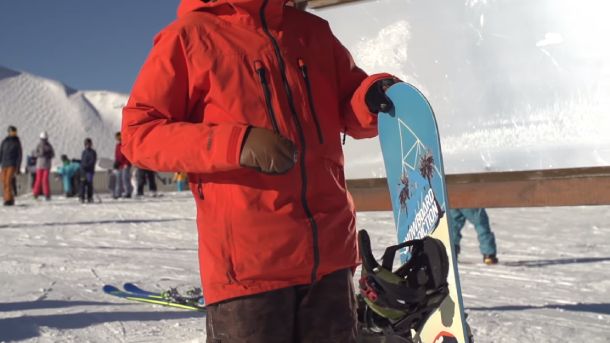 Anyone can try going snowboarding; however, to become a professional snowboarder, you need to have some specific qualities. In particular, snowboarding will be suitable for those who are excited about adventures, strange feelings and willing to deal with dangerous situations. It is possible that men or women with strong personalities will prefer this sport.

To become a skillful snowboarder, you must be good at controlling your body. The reason is that this challenging sport requires the flexibility of the body while moving through the snow. Personally, dancers or those who have a supple body may be potential snowboarders if they spend time practicing snowboarding.

How Does A Snowboard Work?

The first version of snowboard was introduced in 1929 by M.L. Burchett, who tried to go through the snow by using a washing line to fasten his feet to a sheet of plywood, then clinging on to the horse’s reins for moving. 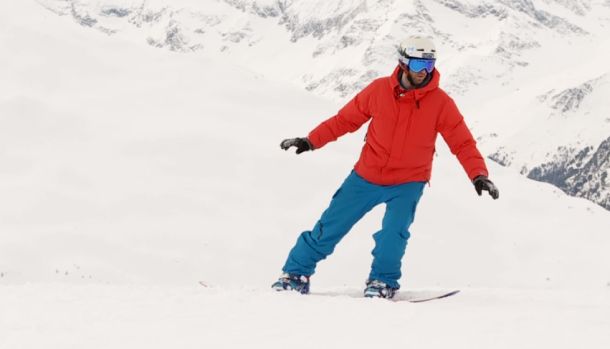 There were a lot of improvements in the technology of creating snowboard after the first version. In particular, the two next versions of snowboard, in turn, came into existence in 1939 and 1965. The former was created by Vern Wicklund, who made a great contribution to the first improvement of snowboards. Meanwhile, the latter called “Snurfer” (a match between “snow” and “surfer”) was a wonderful invention from an American engineer named Sherman Poppen.

Several decades later, snowboarding gained the love of people around the world and officially became a sport in the Olympic Games in 1988.

During the process of development, snowboards have a lot of changes; however, they come with the parts below. 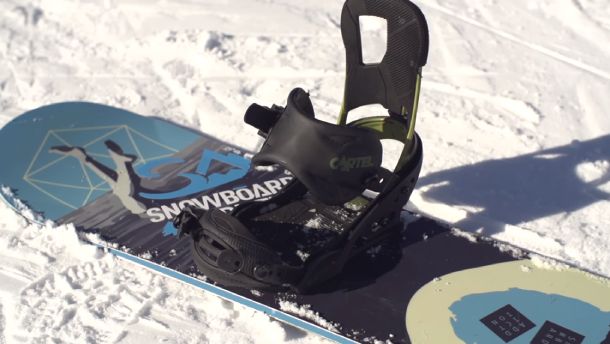 There are different ways to create a snowboard. Previously, its core was mainly made of wood, but some other materials such as carbon are often used for snowboard making these days. 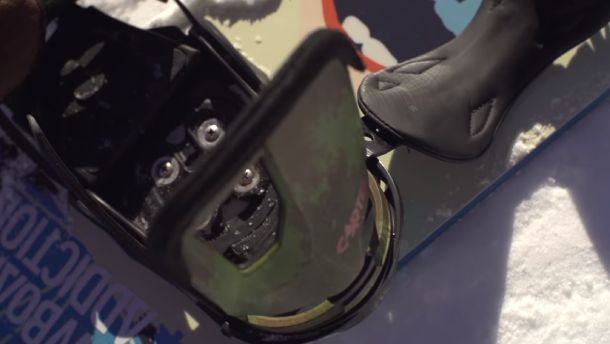 This part is located at the bottom of the snowboard and directly touches the snow; therefore, it plays an vital role in taking a ride over snow.

The best-quality base is made of polyethylene of different kinds and properties. Besides, there are some other supporting materials used. With this material, your snowboard base will be firmer and have a tight grip compared to other types. 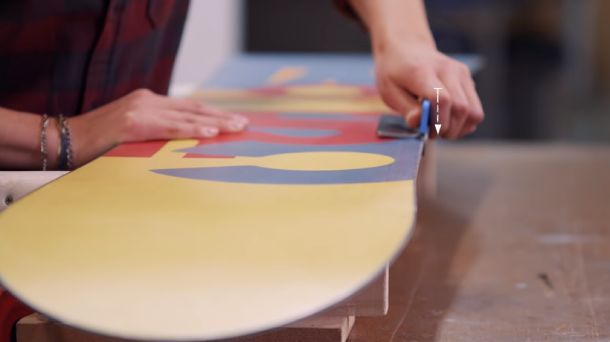 The curve on the edges is the sidecut whose radius is usually smaller than that of skis, between 8 and 10 meters. The size of the sidecut radius will have effects on the form of turns. Specifically, a small radius will produce small turns while a large radius will give birth to large turns.

In terms of hardness, a stiff snowboard is always an ideal choice for professional snowboarders because it is excellent at keeping balance in the snow at high speed. That being said, if you make any mistakes, this type of snowboard cause you terrible risks. 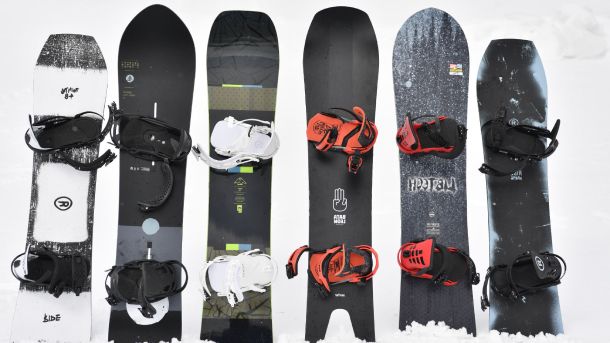 In the market today, there are a variety of types of snowboards. Of all these kinds, All-Mountain, Freeride, Freestyle, and Powder are the most popular ones. Depending on your ability, style, and target, you will select the most suitable snowboard.

While Freestyle Snowboards are ideal for terrain park and street snowboarders, All-Mountain Snowboards are the best choice for beginners. On the other hand, if you are excited about a high-speed boarder, it is recommended to buy Freeride Snowboards.

How To Turn On A Snowboard

It is quite simple to learn this technique. However, if you learn it by yourself or do not follow the guide in the right way, it will become more difficult for you to get it quickly and effectively. Therefore, it is advisable that you should have someone instruct you how to practice this sport step by step. If not, at least you have to have a look at the instructions below.

How to Do a Frontside Turn 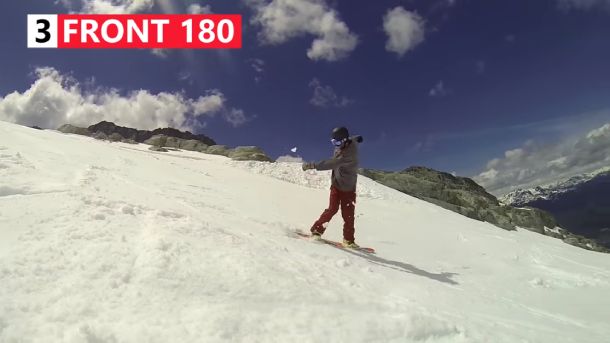 Keep in mind that after tying your feet to a snowboard, you must keep your weight evenly distributed on both legs. You also adjust your snowboard so that it constructs a 90-degree angle with the falling road.

What you need to do next is to make your board flat on the snow. By this way, your snowboard takes you down the hill while the board and the falling road are still perpendicular to each other. You need to put pressure on the back edge to keep the grip on the snow.

After getting used to the snowboard, you put your weight more on your front leg to push your board down the slope. At this point, you will move at a fairly high speed, which probably drives you scary. In such situations, most of you will bend backward by instinct, fall down and end the first snowboarding experience.

Turn your head and shoulders to the direction you want to rotate while keeping your weight on the front foot. When you turn your upper body toward the target, your snowboard will naturally follow these body parts.

How to Do a Backside Turn 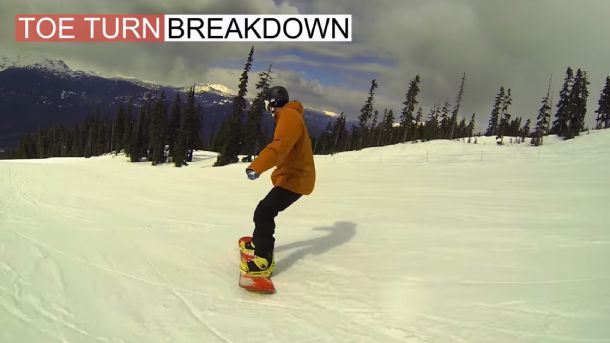 There are some common points between frontside and backside turning. Particularly, when turning back, you also to put the same weight on the two feet.

Flattening the board is a must-do thing before sliding on the snow. When you want to reduce the speed or stop, you put pressure on the front edge of the board.

In case you want to turn, please keep flattening your snowboard while putting your weight to your front foot. Your head and shoulders are the essential parts for turning on the snowboard. Accordingly, you adjust these body parts so that they follow the direction you want to rotate.

Taking the steps above, it is certain that you will be successful in mastering snowboarding as soon as possible.

What to Eat Before Snowboarding

Perhaps not many people know that a healthy and balanced diet has considerable effects on snowboarding experiences. 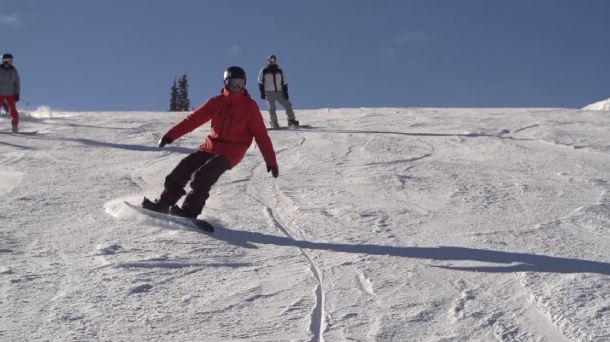 Before snowboarding, you often prepare a lot of essential items including boots, gloves, goggles, woolen cap, binding, and many other ones. But you sometimes forget that it is necessary to design a diet suitable for your surfing over the snow. The fact shows that cold weather often makes you hungry more quickly than normal. What’s more, this sport wastes so much energy. As a result, we recommend that your diet should be supplemented with the food rich in carbohydrate and protein.

To boost your energy before snowboarding, you need to eat high-protein food that can be found in eggs, yogurt, cheese, tuna, dried meat, and so on. If you have a snack before going out for snowboarding, it is advisable to eat these foods.

When your body gains enough nutrients, you will be full of energy to show remarkable performances in the snow.

In addition to protein, the food rich in carbohydrate makes a significant contribution to promoting your boarding performances. Your body will be provided with a large amount of mineral and vitamin when you take some food like bread, brown rice, five grains, and vegetables.

During the time that you take a ride through the snow, you may not get thirsty that can be explained by the fact that in the cold weather, you will break into very little sweat. That being said, the water supply for your body is indispensable.

You can add some bottles of water to your bag, then drink them in the resting time. But it is noted that energy drink that contains caffeine and sugar can cause harm to your sports training. It can make snowboarders or any sports players suffer from the increase in blood pressure and heart rate.

You can consume these foods before boarding or while having a rest between turns. Then, when making preparations for your boarding, you should keep in mind that a big bag with types of foods supporting snowboarding must be included.

The information above covers all the things you need to know before coming to snowboarding. In general, it is an interesting sport, but it will take you a lot of time to master it.

Regardless of whether you play it for entertainment or expect to become a professional snowboarder, we hope that our article is useful for you. If you have any contribution, please leave your comments below.