While classic scooters can be good fun toys for kids, adults can roll on electric scooters to travel a short distance. Our Razor E300 review will give you food for thought when you consider buying a new electric scooter.

Can you trust the Razor brand? 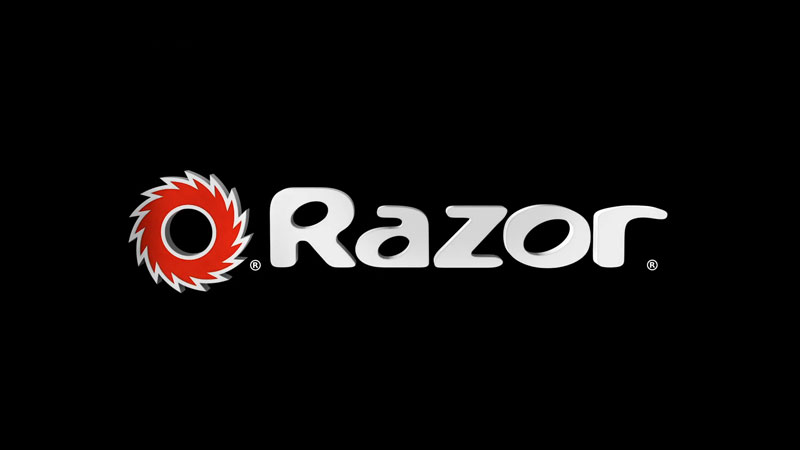 Razor has been a reputable brand on a global scale since 2000. It’s a household name in the scooter industry.

As a matter of fact, the manufacturer has won multiple worldwide awards and taken pride in producing scooters that improve their customers’ lives.

Until now, Razor has sold more than 50 million scooters, consisting of over 15 million electric ones. 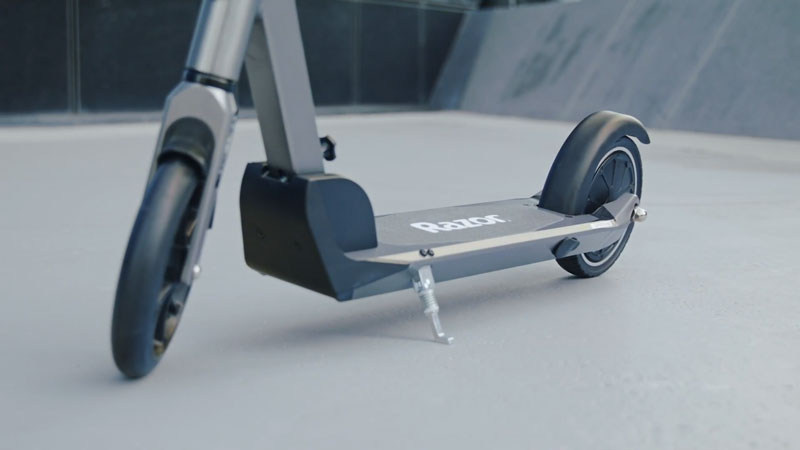 One of the most important reasons why you should choose the Razor E300 is its greatly affordable price even though the price depends on the color. Currently, you can purchase the Razor E300 Electric scooter grey on Amazon at under $300.

Once you pay the purchasing investment, you don’t have to spend a lot of extra cash to keep the scooter running post-purchase.

The E300 requires some simple assembly which takes a maximum of 10 minutes. To lock the handlebar in place, you just need to slide it into the hollow post that is above the front wheel, then use a hex key to tighten the clamp. A hex key, or an Allen wrench, is provided with the scooter.

In addition, the Razor E300 has a solid build to last, made from tubular steel. You can use this scooter for many years. The big frame can afford people up to 220 pounds. Although this limit can support most individuals, you still need to respect the weight capacity, because weight excess will probably lead to premature breakage of the Razor E300.

The deck is wide and made from non-skid material that increases friction, which guarantees you security and confidence on the road.

Another good point is the air-filled tires which have better bump absorption than their airless counterparts. This means that they can absorb some shock without the rider jostling around too much. The 9-inch tires also support riders whose weight is close to the upper limit.

It has a decent maximum speed of 15 mph. However, due to the lack of a speedometer, it’s hard to observe if the maximum speed has ever been reached.

Speed may not be the most important feature spec for anybody, but it may be crucial for some. However, higher speed doesn’t automatically mean better as safety should be taken into consideration.

Like other scooters, it’s really easy to operate. To speed up, twist-grip the right handlebar, which allows you to control the speed of the scooter easily. To brake, you just need to pull the left handlebar lever.

The retractable kickstand allows you to leave the scooter standing upright on its own without the support of any surface or wall.

The manufacturer also guarantees safety for scooter users by ensuring a safe stop. Specifically, when you use the brake, the power provided for the motor will be cut off.

Another appealing feature of the Razor E300 is that the chain-driven motor propelling it at 15 mph is really quiet, so you don’t have to worry about any complaints against noise pollution caused by the scooter. As quoted on the official website, it’s “applauded by neighbors everywhere”.

Because Razor is popular worldwide, it’s easy to find a replacement for parts of their products including the Razor E300.

Despite its advantages, there are still Razor E300 problems that need further improvement.

The range that it can travel is not great, from 9 to 10 miles (up to 45 minutes depending on the speed you have traveled). This mid-range distance on the electric scooter mileage allows you to travel short distances like a ride around the neighborhood blocks, to a store, or across the park.

It takes you approximately 10 hours to fully charge the lead-acid batteries. The manufacturer recommends you charge them after each use regardless of the traveled distance. Despite long hours of charging, the scooter’s run time is only about 45 minutes.

Many customers have complained about the batteries draining fast and their power insufficient for an adult. The lead-acid battery, despite being safer, is primitive and has very limited recharge cycles. As a result, the Razor E300 cannot last more than 5 years without changing the battery.

You should turn off your scooter right after use in order to save its battery and prolong your runtime.

In addition, the weight of the E300 is 46 pounds and it isn’t foldable, so if the battery runs out, it would be a struggle for kids to slug it around.

To make things worse, it doesn’t have a LED display for its battery level, so you don’t know when the battery is low and urgently needs to be charged.

No lighting and locking system

Another problem with the Razor E300 is that it doesn’t have a lighting system. Therefore, in order to move around without sunlight, it’s recommended that you buy a mounted headlight for your scooter.

In addition, the Razor E300 doesn’t have any link or hole so that the owner can use a bike lock. Basically, you cannot lock the scooter, which is very inconvenient if you have to leave it outdoor.

Another reason for you to think twice about buying the Razor scooter is its customer service. The 90-day limited warranty, even with possible extended warranties, is a short period. In addition, the quality of Razor’s customer service is put into question because of low ratings on sites such as Trustpilot and ConsumerAffairs.

This is particularly true for Canadians because according to local law, an electric scooter is required to have pedals to meet bike regulations.

Other scooters to consider 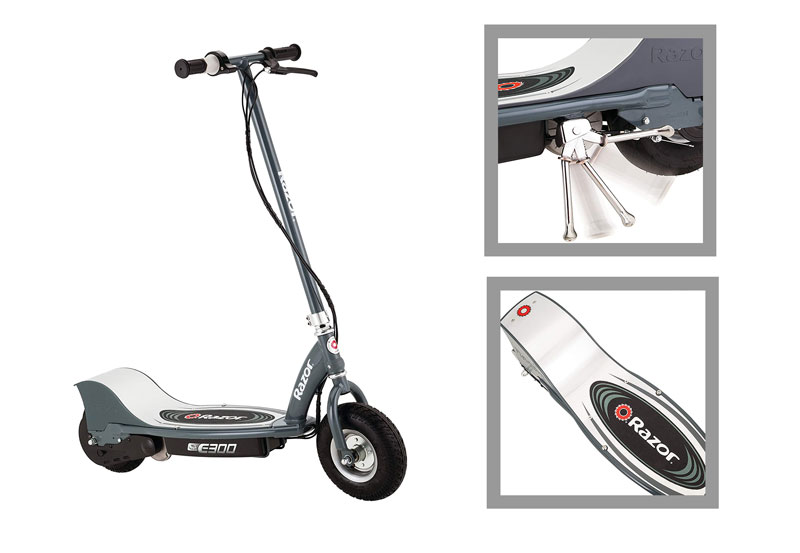 According to the Razor Official Support team, the Razor E300 and E325 are literally “the same scooter with different code names for different resellers.” Therefore, they share the same specs including maximum range, battery time, weight capacity, wheel size, and wheel width, etc.

DEAL OF THE DAY 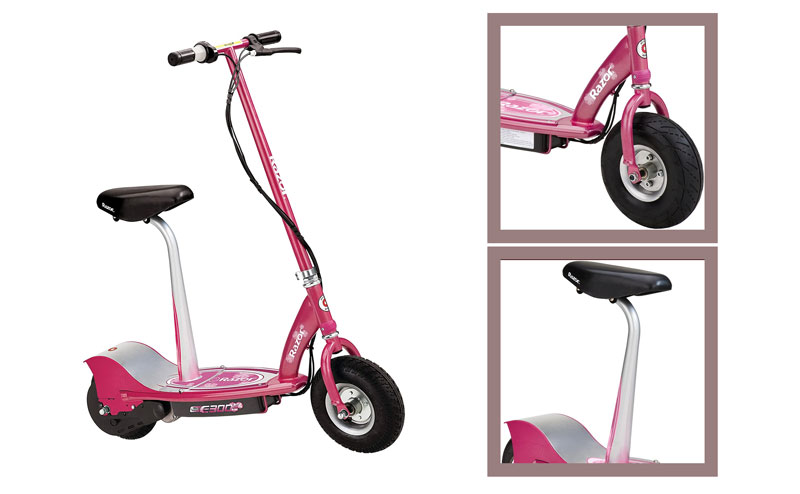 The Razor E300S is an alternative option to the E300. They share the same specs except for a feature which is a removable seat. You can either use the scooter in a comfortable seated position or disassemble the seat to turn the E300S into an E300.

The Razor E300 can travel for about 9-10 miles, which is equivalent to around 45 minutes. The distance that the E300 can cover is mid-range on the electric scooter mileage which is from 5 to 15 miles. With this run time, you can use the Razor E300 for almost all leisure activities, while commuting is not an option.

The maximum speed of the Razor E300 is 15 mph. However, if you wish to make your scooter go faster, there are some suggestions for you to try to get your Razor E300 modified.

You should charge until the charger light turns green. It takes you approximately 10 hours to fully charge the lead-acid batteries. However, if your scooter is completely out of battery, the total charging time can rise up to 12 hours. It’s worth mentioning that the E300 requires an initial charge of a minimum of 12 hours. You should refer to the corresponding manual page regarding battery and charging to gain valuable information about ways to maintain the batteries in top condition.

4. Can you overcharge a Razor scooter?

Even though the provided charger of the scooter can prevent overcharging, the battery can still overheat and shortens lifespan if you charge your scooter for too long e.g. more than 24 hours.

The Razor E300 has two 12-volt lead-acid batteries hidden in the thick deck.

No, it isn’t. However, you can disassemble the handlebars to store the scooter easier.

7. How fast does a Razor E300 electric scooter go?

The maximum speed of the Razor E300 is 15 mph which is fast for an electric scooter. Even though it is not the fastest, you still can enjoy some breeze brushing over your hair when using the E300. What is appealing about the Razor E300 is that the motor propelling it at 15 mph is really quiet, so you don’t have to worry about any complaints against noise pollution caused by the scooter.

According to the Razor Official Support team, the Razor E300 and E325 are literally “the same scooter with different code names for different resellers.”

The most notable difference between the Razor E300 and E300S is the seat. While the former is a free-standing electric scooter, the latter is equipped with a seat for more comfortable operation. Besides the seat, both models share exactly similar specs. Since the seat of the Razor E300S is removable, you can choose however you want to ride it, either standing or sitting.

Yes, regardless of where you purchase the scooter, the warranty period will be 90 days.

From our Razor E300 review, if you are a commuter, this scooter model may not be the product for you. However, if you are looking for some fun and your budget is limited or you just start scooting, the basic Razor E300 may just be the one for you, especially for teenagers and adults.

Since it has a relatively good maximum speed, super-sized deck, and good tires, it can meet your demand for traveling short distances like a ride around the neighbor blocks, to a store, or across the park. Overall, the price matches this very basic electric scooter.